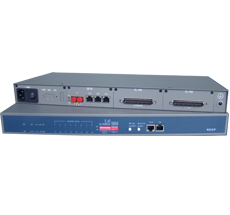 REOP is the IP over TDM converter, which supports the conversion from MAC frames to 1 – 16 E1 lines. The maximum bit rate is 31.68Mbps (16E1 lines). With different LAN card, E1 card and power card, it can meet various requirements. It not only provides alarms and status of the E1 line and Ethernet interface together with advanced management functions, such as, throughput statistic of the Ethernet.
넳 넲